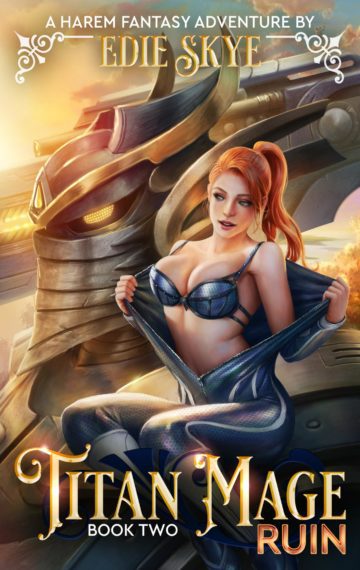 $4.99Buy NowRead A SampleSee The ReviewsSee The Full Series

A monster-infested ruin? A dangerous bounty? A missing archaeologist? Sign this crew up for adventure!

It’s been one month since Locke was reborn on the world of Haven, and he’s still learning his way around. But his magic powers, giant mech, and brand new buff body definitely help. Not to mention his three gorgeous crew mates—Captain Alyssa, fellow Titan Mage Ember, and Chief Engineer Bexley—are determined to … help him get used to it.

He’ll have to get used to it all fast, though, because their next bounty is a tough and personal one. An entire expedition has vanished at the site of an ancient ruin.

An expedition including Ember’s mother, Erudicia.

This is no small task. On Haven, ruins involve more than lost history. They mean valuable artifacts, ruthless bandits, and magically-mutated monsters, and though Haven’s leading research society usually looks after its own missing crews … for some reason, it’s in no hurry to find Erudicia’s.

Locke suspects Ember knows why this particular expedition has been abandoned. He also senses she fears what she might face when forced to reunite with her estranged family. But Ember’s not one to let a little fear stand in her way, and neither is Locke. Not when they have their badass mechs called Titans on their side.

Still, questions remain: What caused the rift in Ember’s family? Why was the entire expedition abandoned? What kind of monsters lurk in that ruin? And have Locke and Ember upgraded their Titans enough to survive the trial to come?

WARNING: Titan Mage Ruin is a fun fantasy adventure containing steam both punk and smutty: voluptuous airship captains, eager engineers, and lascivious mech pilots. (So don’t read it and then complain about the spice. Y’all know exactly what you’re getting into.)