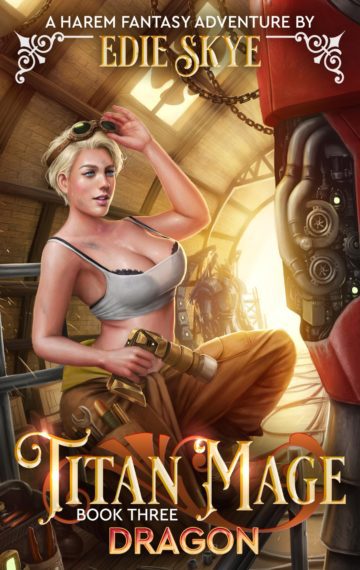 Six months have blown by since Locke was reborn in another world with his hot new body, magic powers, and a giant mech called a Titan. In that time, word has spread that he’s a new void mage—the rarest mage type—and now every woman he meets wants a piece of him. But only the voluptuous ladies of the airship Blue Heron can claim his heart (and … the rest of him).

They’ll need all of him to take on their next bounty, for it promises to test their skills to their limits. A once-simple drake-hunting job has now turned into a dragon-hunting job— but there’s more to this bounty than meets the eye. Something has twisted the dragon, Ultranoth the Organized, from a reclusive collector to a rampaging winged terror, and that “something” might just be the same thing that caused the downfall of civilization a thousand years ago.

It’s a job that only Locke and his crew are qualified to take … especially since his crew includes Chief Engineer Bexley. Or, as she’s more formally known, Lady Beaunessia Valerie Brimble Morton, prodigal (and proud of it) daughter of the distinguished Morton family—and childhood friend to Ultranoth.

But will Bexley be able to reach her scaly friend? And if not, what then? Will their two Titans be enough to bring down a dragon?

Or is it finally time for their third Titan to enter the fray?

WARNING: Titan Mage Dragon is a fun fantasy adventure containing steam both punk and smutty: sexy mechanics, sensuous airship captains, racy mech pilots, curious catgirls, and saucy language to match. (So don’t read it and then complain about the spice. Y’all know exactly what you’re getting into.)